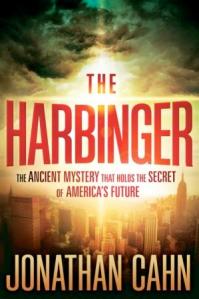 One thing I’d like to do a bit more is review some of the books I read. I don’t read a gazillion of them, but I do like to share my thoughts on them when I do.

I am going to start with a book I just finished: The Harbinger, by author Jonathan Cahn. Mr. Cahn is the leader of Hope of the World Ministries, an evangelical outreach organization.

I do not purchase many new books. Having a large family and trying to maintain a budget, I usually check with my library first for my leisure reading. When I either cannot find it from the library (often enough for religious/spiritual books) or decide I want to own it, the title goes on my wish list for birthdays or Christmas. If I don’t want to wait, then I look for good deals on used copies on Amazon or elsewhere.

The Harbinger was an exception. Touted heavily on World Net Daily, and also featured on Spirit Daily (a Catholic-based news site), my interest was heightened to the point where I decided to buy the book new.

I almost feel bad about the review I’m about to give, because it is not favorable. So before I go there, let me differentiate between the book itself and the book’s insights and message. The entire prophetic insight is a tying of what is happening in America today to what occurred long ago in ancient Israel, and in particular centered about the hard-hearted response of the nation of Israel in Isaiah 9:10. There are some very interesting parallels that are presented in the book. For the most part, these things are thought-provoking and worthy of study and contemplation. The message itself with respect to what is in store for America if there is not repentance for straying from God is spot on, as well. All those aspects of the book are worthy of note and generally a good thing. What is not good is the book itself. So, keep those high points in mind as you read the rest of this post.

Mr. Cahn decides to present his insights and study of Isaiah 9:10 (and surrounding verses later on) into story form. All that is well and good, but the story serves almost no purpose, and is not remotely entertaining. The book is 253 pages long, 250 pages of which is conversation. Even more frustrating is the incredible thick-headedness of the man at the center of the narrative. The conversations are reduntantly redundant, and no matter how many times a point is made, the main character reacts as if it’s a brand new revelation.

The format of the story is that the main character, Nouriel Kaplan, tells his tale to a woman, Ana Goren, who has something to do with publishing or marketing or something that isn’t quite clear. And when I say that he tells his tale, that’s all he does. Oh, they eventually get up and go for a walk to somewhere that is not embellished upon, but their interaction is a conversation. A long one. And what he is telling her is a recounting of his conversations with a Prophet. We never find out the Prophet’s name, through no fault of Mr. Kaplan’s attempts to uncover this detail.

So, Mr. Kaplan gets a seal (as in a small waxy seal that secures a bound scroll) in the mail with markings on it, and happens to sit on a bench one day to look at it, when it all begins. The Prophet is on that bench, and as the book moves along it becomes clear that he is some supernatural figure with a divine purpose. Well, I won’t spill all the beans here with respect to what is all discovered by our friend in the book, but each encounter goes something like this:
Prophet: Here is another seal for you to worry about, and here’s an enigmatic clue as to its meaning, but I’m not going to tell you what it means. You need to figure it out for yourself.

One was left wondering the point of all the waiting and wheel-spinning, if the Prophet was just going to spill the beans anyway. Other than to fill up pages with the hopeless pursuit, that is.

To the extent that the interesting aspects of what Mr. Cahn has observed were laid out, the background and history were intriguing, and this is clearly the most redeeming aspect of the book. But all of these things could have been covered, even with relatively extensive commentary, in 50 pages or less. Quite honestly, I found myself forcing my way through it many times just to get to the next relevant part, and at some points I was outright wishing we could just get it all over with.

I would have much preferred something other than a forced story that really wasn’t much of a story. A commentary by Mr. Cahn just providing the scholarship behind his observations and insights and the history that accompanies it would have simply been much better, much more concise, and interesting. If wanting to provide it in terms of a fictional story, then a book-long conversation that made you want to smack Mr. Kaplan upside the head and say “How do you not know the answer to that question yet, you moron?” wasn’t the way to go. I don’t pretend to offer an example of how one would have actually written a story where actors are playing it all out and discovering these ancient mysteries along the way, but almost anything would have been better than a book-long account of a reporter recording a very wordy prophet saying the same thing in a dozen different ways.

Mr. Cahn also cannot resist interjecting a little outright evangelization at the end, which is fine as far as that goes. As a Catholic, it is easy to recognize that he is not one, and we do see some of the “it’s about faith, not religion” pronouncements from the Prophet that are a bit problematic, as if the two things are not in any way compatible. But quite honestly, that whole chapter has nothing at all to do with the insights of Isaiah 9:10. It simply reminds us that no matter what happens to nation or peoples, we still have to account for ourselves, which at the heart of things is a fine message. But again, it’s just all a long conversation.

So, I realize this sounds a bit harsh. I admit to being disappointed with the book. But my disappointment is almost more in what I perceive as a lost opportunity. You see, I actually do think that it’s worth understanding what it is that Mr. Cahn sees. I think there are some stretches, as far as a couple of his “harbingers” go (I mean, really… the “vow” made by a failed VP candidate in 2004, regardless of where or how he said it, just doesn’t seem to be nearly as alarming as Mr. Cahn apparently believes it is), but having said that there are remarkable parallels that he has uncovered that, at the very least, make you go “hmmmm.” But the problem is that the book itself is so overly verbose, and – quite honestly – boring, that you lose the excitement of some of these interesting elements. And I’m someone who really enjoys reading this kind of stuff.

I have seen that some donor has decided to send a copy of this book to everyone in Congress. That’s all fine and dandy, but the travesty of it is that I am almost certain that someone who might otherwise be interested in and appreciate a more concise and/or entertaining approach towards sharing the insights around Isaiah 9:10, but who is not necessarily a person of strong faith or is not inclined towards the prophetic, will be utterly bored with this book before it even gets to the point of shedding light on some of the more important areas of consideration. And that is, itself, a missed opportunity and a bit of a travesty.

One final word, back to the positives around the intrigue of many of the harbingers of America’s recent past and possible future… I am not among those who believe that there is no such thing as a coincidence. When I meet someone in South Dakota from a place I used to work, and there is no other particular import that comes from that, I chalk it up as one of life’s interesting coincidences. Neither do I believe that all “coincidences” are simply that. When our second President – John Adams – and our third President – Thomas Jefferson – both signed the Declaration of Independence and then each died exactly 50 years later, on July 4, 1826 then there just seems to be another hand at work there. Signs and symbols and all that. So, as we uncover the “harbingers” relating America’s fate to that of ancient Israel, and how that relates to Isaiah 9:10, I will say that some of the things strike me as a reach and some things don’t. The things that look like a reach have nothing to do with me not accepting the divine hand of parallel activities, it is that I just don’t see the import of some of the things that Mr. Cahn does. But there are certainly some unmistakable parallels that are either coincidence or they aren’t. And if they aren’t…

Recommendation: If you can borrow this book, or check it out at a library, it’s worth the time to scan through and pick up on the interesting parts. If you want to read the whole thing, go for it, but you really aren’t missing anything by skipping over a lot of the filler. Preferably, assign it to your kids as a book report and make them summarize it for you.

Links related to my music and CD