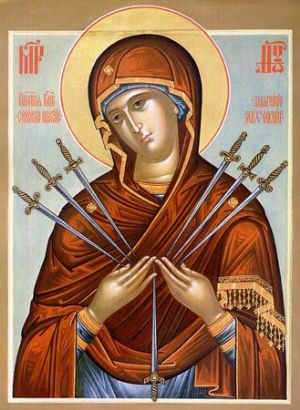 Moscow, January 27, Interfax – The Softener of Evil Hearts Mother of God Icon at the Cathedral of Christ the Savior in Moscow has started streaming myrrh.

In line with a long-standing church tradition, the icon has been specially brought to the Church Council meeting currently being held in Moscow, at which over 700 of its participants earlier cast their ballots to elect a new Patriarch of Moscow and All Russia.

A tabulation commission member is expected to announce the result of the voting within minutes.

Myrrh, as we all know, was one of the gifts presented by the Magi to the infant Jesus. This was to be a sign of the suffering of Jesus. Mark 15: 22-23 alludes to myrrh being offered to Jesus mingled with wine. Jesus did not take it. John, however, presents the use of myrrh in the preserving/embalming sense in John 19: 39-40, used to prepare Christ’s body after His death on the cross.

So, assuming the reports are true, what possible meaning would tears of myrrh mean from a the icon Our Lady, as it relates to the new Patriarch of Moscow and Russia? It is difficult to believe that God would present a sign with no particular relevance. (Since this article was released, the new Patriarch was chosen – Metropolitan Krill (now Cyril). His election potentially bodes well for greater unity with the Roman Catholic Church, if Cyril’s past actions are an indication of the future.

Now, I don’t wish martyrdom upon the Patriarch, nor do I claim to have any particular wisdom on this matter. So, for now, this was just something that made me go “hmmm…” Perhaps it is a call to prayer for the new Patriarch, and for all of Russia, if not the entire Christian world.

I am, of course, assuming the reports of the crying statue are true. All I have as evidence of that for now is the little blurb I linked to.

There are a couple other instances of icons exuding myrrh.

According to this link, the following occurred:

In 1955, Bishop Vitaly, along with his monastic brotherhood, was transferred to Canada, to the city of Edmonton, from where he ruled the western part of Canada. Later he was assigned to Montreal and elevated to the rank of Archbishop of Montreal and Canada. …

At his position in guiding the Canadian diocese, Vladika Vitaly faced an event that was auspicious, not only for the diaspora and for Russia, but for the whole world. That is, the glorification of the New Martyrs and Confessors of Russia and the Holy Royal Martyrs, which took place in New York on November 1, 1981. The future metropolitan, as well as all the hierarchs of the Church Abroad, considered this event to be epoch-making, for the glorification of the choir of New Martyrs by the earthly Church could not but have a response from these saints in Heaven at the throne of God! This may have been the turning point in the resurrection of Orthodox Russia.

Within a year there followed a clear sign of the mercy of God-the appearance of the miraculous Myrrh-streaming Iveron Icon of the Theotokos in Montreal. The abundant flow of myrrh from the icon in the course of 15 years was a precursor of the good changes that would take place in the homeland-the freeing of the Orthodox Church from the yoke of the Godless authorities and the beginning of the spiritual rebirth of the Russian people. Throughout the course of the 15 years, until the martyric death of the guardian of the icon, Brother Jose Munos, and the disappearance of the icon in 1997, Br. Joseph was in obedience to Metropolitan Vitaly. Moreover, it was namely Vladika Vitaly, being the Archbishop of Montreal and Canada, who witnessed to the miraculous appearance of the new Myrrh-streaming icon of the Theotokos.

Br. Jose recalled that soon after the icon began to stream myrrh, Vladika “learned of the miracle and sent word that we were to come to the monastery [in Mansonville]. When we arrived at the monastery with the icon, wrapped in cloth which was soaked with myrrh, Vladika first of all took cotton and wiped the icon dry, thereby taking all the myrrh that was on the icon. Then he took the icon and carried it through all the rooms of the three-storey monastery house. When he returned to the church, the icon was again covered with myrrh, which flowed from the hands of Vladika. He bowed down before the icon and said that a great miracle was taking place”(The Montreal Myrrh-streaming Icon and Br. Joseph, Montreal-Moscow, 2003)
Vladika Vitaly always considered himself responsible for the icon and its faithful guardian, Br. Jose.

And then there’s this account of an icon in Donetsk:

Moscow, August 30, Interfax – Exactly three months before a Tu-154 Pulkovo airliner crashed on May 22, an icon of St. Nicholas the Wonder-Worker, the patron saint of travelers, began exuding myrrh at a small church in Donetsk.

‘It happened for the first time at this church. Drops of myrrh appeared on the face of St. Nicholas. For a week they as if trickled down from his eyes’, a vicar Bishop Sergiy of the Donetsk diocese said as cited by the Zhizn daily.

He also noted that the icon cannot ‘cry out of joy’. ‘There is so much evil and hatred in the world today: a war in Lebanon, terrorist acts, murders. The icon warned us: Come to your senses and stop!’ the bishop added.

The Tu-154 airplane en route from Anapa to St. Petersburg crashed near Donetsk on August 22. It carried 159 passengers including 45 children and teenagers and ten crew. They all died.

Take it as you will…

Links related to my music and CD